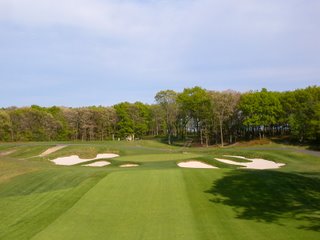 1. New Jersey will become the first state in the country to institute and drug testing policy for high school athletes. The program will screen random athletes for about 80 different designer performance enhancing drugs ranging from amphetamines to steriodal based old-style drugs banned for years. Final details will be released June 7. One state elected official, Sen Richard Codey was reported in the New York Post as saying “Taking steriods is cheating.”

Nice to see someone gets the message, unlike ESPN, who empower and enable cheaters with their “Bonds on Bonds” series. Recently, Bonds graced us all with his magnanimity by reminding us “Barry Bonds has broad shoulders and can bear the burden placed on him. I forgive them for what they have done to me.” Sadly, someone in Bristol is saying “Now that’s great television!”

Oh, Playmakers, where have you gone?

2. Continuing our discussion of Greater NYC golf courses, Anonymous asks why I don’t like Bethpage Red. As most of my readers know, I love the Black but believe there is only one course worth playing at the entire complex. See my earlier article for Golf Club Atlas where I wrote “Upon Further review, the play stands as called – I won’t play the Red.” 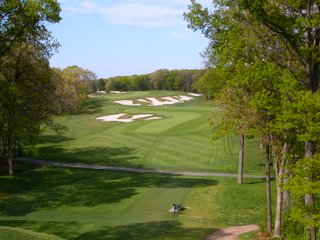 1) A lack of interesting holes and a lack of variety in the holes. It is 18 holes of mundane parkland golf. OK…13 has interesting lines of charm with a waste bunker bisecting the fairway perpendicularly. And 1 is a stout par-4. And maybe the good conditioning wins points, but on the whole there is little that is memorable. 15 is a dog of a 90 degree angle par-5.

2) The Black is sitting mere feet from the Red. Therefore, the Red is the “wingman.” Imagine, if you will, your best friend playing the Black while you’re next door slumming it on a course you could find anywhwre in America in generally any city with speakable public golf.

As Hollywood Jack said to Ed Exley in L.A. Confidential “Oh, I see how it works. You get the girl, I get the coroner???”

3) With the exception of 13, there is nothing there I have not seen before.

Now, with regard to the Blue? I’d rather go to my law office and work all day.

I’ll play one hole with you.

There is one course there and it is Black. You keep your silly little Red and Blue.