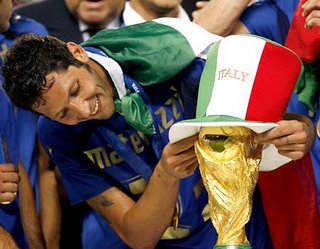 Italy’s Azzurri (“Blue”) completed their cinderella run to the World Cup in the same dominating fashion with which they began, but not before giving their fans a massive case of agita. After referees awarded a highly questionable penalty kick to France after Therry Henry took a dive in the penalty area, Italy – down 1-0 thanks to Zidane converting the “free throw” of a kick (I mean that’s whgat PK essentially are) – scored on a gorgeous diving header to even the match, then survived a penalty kick shootout to record their fourth World Cup title and first since 1982.

“What a play the goal was!” shouted Italian fan Giovanni Paulasi. “To give up a goal and then come from behind is wonderful. Comebacks don’t happen that often at soccer played at this highest level. It is a testament to Italy’s strength” he said while sipping Chianti at a Mulberry Street Ristorante.

But this Final will also be remembered for the unsportsmanlike conduct of the player touted most in the American media prior to the match. Barely ten minutes from penalty kicks, French captain Zidane lowered his head and head butted an Italian defender in the chest while play was being reset by the referee.

Some French apologists are “investigating” whether he was provoked by a racial slur, but that is wild speculation at best.

Zidane is a French born Algerian. How the hell do you insult an Algerian? That makes no sense.

“I have no explanation and frankly I am embarrassed. He never should have done this and worst of all in the Final.” said one French fan dressed in a Zidane jersey. “To end his career that way by letting down his team and country is awful. Here we go, the whole team is about Zidane and he does something he knew would hurt the team. Maybe we learn a lesson that such a thing is what happens when you make one man the whole team.”

Zindane, who should have just said “Hey! Don’t bust my parlines!” to trash talking Italian defender Marco Matarazzi and walked away, instead will be forever linked to this ugly incident on which his career ended. He was nowhere to be found when the French Team needed him most. In a nod to his career, maybe FIFA – often seen by soccer fans as misguided at best – awarded him the “Golden Ball” award, the honor bestowed on the tournament’s most outstanding player. That’s despite the searing achievements all month by Italian goalkeeper Gianluigi Buffon and Italian defenders Mattarazzi, Fabio Grasso and Cannevara.

Even French fans thought this was a mistake. “He had a good tournament, but it sends a bad message to the world to show support indirectly for what he did on the field. He did not keep his head and at such a crucial moment. He should have known better” lamented Sherri Beaulait at a French cafe across the street from where Italian revelers still celebrate a day later. “But the Italians did not cheat. They played well and not to recognize one of them as the winner of the Golden Ball Award lessens what they did. They were great defenders. Americans may not find defense beautiful or exciting, but it won a championship yesterday and does that alot in sport.”

Indeed, Italy gave up the fewest goals and led every offensive and defensive catagory that mattered over the entire 32 team field. Not a single goal was surrendered to an opposing team during actual play – the two lone tallies against were an own goal and a PK. That is the single greatest defensive performance in World Cup history.

Italian fans mobbed Mulberry Street and chanted and sang while dancing around cars with Italian flags draped over them liked blessed shrouds.

Most people cheered or smiled as the throngs sang joyously, but the Goa province owner of Baluchi’s Indian Restaurant was not amused. “They keep coming in screaming about Italy and we are not Italian. We are Indian dammit!” he shouted as a quartet of blue shirted revelers shouted through the open windows at patrons “Hey! Baluchi’s! Forza Italia!”

“Get out of here! Italy is far away!” the owner shouts back.

Meanwhile all anyone in the American media wants to talk about is Zidane. People are right – we might not understand or get this game as well as we should. ESPN makes the same mistake in football alll the time, lionizing showboating receivers who are “playmakers” but eating crow when defensive schemes such as those the Steelers and Patriots put together win four of the last five Super Bowls.

Nevertheless, for the next four years, Forza Italia. Sempre! Hail to the champions – Campignone del mundo.