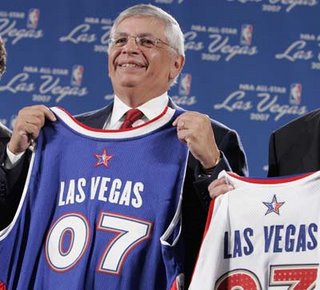 Knick fans’ blue and orange blood ran in the streets tonight. The Knicks season is over before it starts, no matter who they draft. Team management is in disarray, the lunatics run the asylum, prices escalate, money is wasted and the fans come last.

Despite the support of ESPN and local New York City newspapers, the fan run protest of team mismanagement by owner James Dolan and team president Isiah Thomas fizzled. Barely thirty young fans gathered at a bar close to Madison Square Garden at a rally that was a basketball version of an Irish wake. Sure, they yelled and chanted and carried the odd sign, but more fans watched disinterested from the sidewalks than participated.

The most telling assessment came from the lone plainclothes policeman assigned to monitor the protest which began at Mercury Bar on 9th Avenue and 46th street.

“Sarge? It’s [name removed]. There’s only thirty of them here. Naw…I don’t need anybody. I got it.”

That was the death knell for the Knicks. One overweight middle-aged cop could control the anger of the fans. So much for grass roots change. Somewhere, Dolan is laughing.

Yes, the traveling three ring hardwood circus that is the NBA rolled guffawing into town, passing out their version bad LSD/stale coffee to any chump stupid enough to stick out his tongue. The entire shuck of an NBA Draft was a sad, expensive dog and pony show. All the while, the fans suffer and pay and pay and pay…for a brutal unwatchable product.

New York’s situation could happen anywhere. An inexperienced, immature and uneducated owner, star-struck with athletes runs the team with an iron fist, prizing every last cent form the fans and yet fielding a team full of lazy self-aggrandizing prima donnas.

“We need to initiate change. The fans are fed up with management” said Mr. Orange, the organizer of the protest and founder of www.selltheknicks.com. “Dolan is supposed to be a savvy businessman, so he should understand when he is selling and we are buying an inferior product. All we want is a team worthy of the ticket price and the stature of the league.”

“You have to do a better job in the biggest market and with the biggest payroll” said Ben Patterson, a lifelong fan from Staten Island. He spends all this money, ticket and concession prices are astronomical and we have a terrible, laughing stock product.”

“We need more fiscally responsible management. We are the most loyal fans, but management has been disloyal to us” said law student Dave Sorani, echoing the perception of many that Dolan sold out the fans to shoot baskets and talk shop with Hall of Famer Thomas. Indeed, some decisions by Dolan have been so asinine, the perception may be reality. “He got the team from daddy and he’s playing with it like a toy” continued Sorani. “There’s no checks and balances on Dolan’s decisions and he has let Thomas craft a team that is selfish, incohesive and dispassionate. If this were any fiscally responsible company, Thomas would have been gone long ago.”

Meanwhile other fans watch mildly disinterested. “I heard about it, but I’m not going” said one fan. While some honked car horns in support, and some clapped and egged demonstrators on in their protest chants of “Duck Folan” and “Fire Isiah,” the blasé, shoulder-shrugging “whatever” attitude is more akin to Morocco than the USA. “I’m too diehard a fan to join the protest” said another fan. “I’ll keep coming and paying my money even though they suck. Whoooooooooo! Go Knicks!” he shouted as he ran to his general admission floor seat for the draft.

The fate of the team’s fans is in the hands of kids in “I can be your private dancer” T-shirts and baggy overpriced jerseys. Call the coroner, the Knicks are DOA this year.

Even worse, security, NBA Entertainment execs and broadcast crew smile wanly as the small protest rolls by spewing obscenities about Dolan. Three official-looking NBA Entertainment chumps in suits too small for their oversized bodies are laughing long and hard at them while simultaneously inhaling shrimp cocktail. The food rotates grotesquely in their open mouths as they chew and laugh like donkeys. They spill sauce all over themselves laughing and slapping each other on the backs and making themselves and their laminated credentials obvious.

Meanwhile the rest of the NBA “in crowd” arrive like so many pseudo-glitterati in their ridiculously large diamond earrings and necklaces even though they have yet to contribute their obligatory 3.2 points, 1.2 rebounds and 4.1 arrests per year. “Step aside, make way, big bling comin’ through yo!” shouts one player in a wiiiiiiiiiiiiide pinstripe suit more apropos to a pimp than a professional anything. “I’m royalty and I’m about to be coronated.”

Good lord…”coronated?” It’s a good thing for us he’s not a doctor. “You’ll never have to work again in your life!” shouts a clapping, sycophantic TV broadcast crew member as he walks in to MSG. Was Shaquille O’Neal right when he referred to non-members of “The Association” as “earthlings?” Does this superclass of privilieged athletes hold us in that much disdain and contempt? Even their families roll through the crowds like hot knives through butter. “Move please” says one woman as she rudely elbows fans aside. “I’m [name deleted] god mother. ” “I’m [name deleted] grandfather” says another.

But that’s today’s NBA. It’s just like a rock concert entourage – backstage everybody’s somebody – and usually full of inflated self-importance. Please! Somebody coronate these people and fast. Preferably right to the head: soon and often, use force if you have to!

Finally, at 7:35 a giant grinning bespectacled frog waddled to the podium to an enormous chorus of Bronx cheers. This is Madison Square Garden Theatre, yet nobody can hear him call Andrea Bargnani’s name. I guess if you wanna hear, you have to pay $300. That’s how much the Madonna tickets sold for at the Garden for the concert tonight.

Moreover, David Stern and any player look like a ridiculous version of Gandalf and Frodo standing next to each other – only Frodo is grinning with a manic, selfish glint in his eye. After all, the money wheel keeps turning and it can’t slow down. $6.50 for a Bud Light – but “Oh no, we have no imported beer tonight” says the merch wombat looking almost scandalized. “There’s lots of kids here tonight!”

What is this, Manhattan or Dubuque?

Meanwhile fans boo Bargnani for being Italian, chanting “USA! USA! and boo Adam Morrison for being Adam Morrison, when he’s selected by the Charlotte Bobcats.

Shouldn’t they be cheering that he was selected by the Bobcats? With Jordan running that team, he’ll never be seen or heard from again…

No, the way to beat a guy like Dolan is to hit him in the wallet, but that will never happen. For every fed up fan there are two more star struck, TV-anesthetized groupies desperate for vicarious satisfaction.

Just take a look at the other horror show playing the Garden tonight. Madonna, shameless, old-and-slow, money-grubing tramp that she is fleeces $300 per ticket from old blue haired dingbats who pay $50 per T-shirt – $75 for one with her gyrating around a stripper pole. All that is left is for Debbie Reynolds and Florence Henderson to sell tickets to a show where they french kiss each other. That’s the last sign of the apocalypse. At the Garden, can it be far?

Meanwhile a decal graces the Garden Ticketmaster window which reads “Fans First!” Outside blue and orange blood runs in the streets and few seem to care.

It makes no difference whether the Knicks draft anyone this year. They might as well trade to the New England Patriots for Diet Pepsi Machine. Basketball in NYC is dead, but precious few mourned its passing.