The Knicks vs. the fans of New York: The Natives Scream for Blood Sacrifice 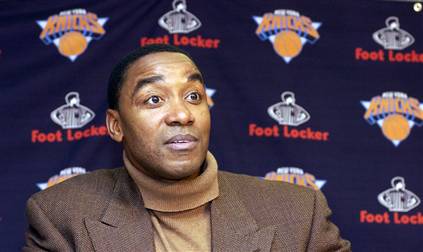 Most Egyptologists agree the famous boy-king of Egypt, Tutankhamun was ruthlessly murdered. Some blame court intrigue saying Tut’s inexperience and tender years were a recipe for mis-management of the realm.

How many boy-kings in history have had the political acumen and intellectual prowess to protect both the kingdom and their necks? It would be easy – don’t you think – to merely whack young Tut and blame it on natural causes and then just take over.

It’s too bad mob justice cannot carry the day for the New York Knicks and their legion fans. The barbarian boy-kings he not at the gate, he rules the kingdom; and things have just spiraled down for the team at an exponential rate. But with the latest public relations debacle – suing fans for expressing dissent in the form of a free speech rally with T-shirts of the offending owner and president/coach – James Dolan and Isiah Thomas have got to go. Now.

There are bedrock rules in New York City – don’t burn the locals. Suing fans – The Knicks vs. the People of New York City – is just as odious as the Recording Industry suing kids for downloading music. The natives are rightfully angry and demand blood in repayment.

Larry Brown, the only coach to win both an NCAA Championship and NBA Championship, was run out of town unceremoniously by the Cassius and Brutus of New York City – James Dolan and Isiah Thomas. Thomas was recently named as the replacement for Brown as coach.

Thomas has sullied everything he touched as a manager – the CBA, the Toronto Raptors, The Indiana Pacers and now the once proud New York Knicks. Let’s be candid – had the NBA not swallowed the whistles in the late 80s in trying to corner certain demographic markets, the “Bad Boy” Pistons would never have beaten the Celtics or Lakers.

Fox Sports Broadcaster Steve Czaban offered this bit of wisdom back in April: “The only thing left is for Isiah to coach the team himself. That should be hilarious. Sort of like allowing th guy who set the building on fire to run out the back door and then jumpo on the fire engine and start working the hose.”

Close – its really like the clowns coming out to hose everybody down with seltzer bottles.

Hanging out with athletes is a seductive, soul-selling groupie syndrome. Dolan has sold out the fans and the franchise to hang around and shoot hoops and talk sports with a marginal-at-best legend. Moreover, now that Dolan helped Isiah avoid responsibility for a sexual harassment suit that would have been a media circus a nd destroyed his carefully crafted image, Dolan is de facto coach of the team.

Neither Dolan, Thomas, nor the gimcrack assembly of overpriced slackers they imported to Camp Cablevision was worthy of working with a proven winner like Larry Brown. Sure, Brown may jump from job to job, but his record speaks for itself. Has ANY other coach in any other sports amassed such a perennial winning percentage? And don’t throw out Phil “Big Chief Triangle” Jackson because Jackson hasn’t had to work with the turkeys Brown has inherited. Brown takes proven losers and makes them overachievers. Here, in full, is his record:

Hey Dolan and Isiah: maybe its you. But don’t take my word for it. Back in February, The Daily News’ MIke Lupica wrote: “who else on this planet signs Jerome James for $30 million? Who else gives $50 million to Jamal Crawford and trades Kurt Thomas for Quentin Richardson, who can’t jump and had a bad back before he got here? Who traded an unprotected lottery pick that might turn out to be the No. 1 pick in whole draft for Eddy Curry? There is no point guard in the house, there is no power forward, and guess what? We may have been a little premature sending Channing Frye to the Hall of Fame. The Knicks turned no corner last night. The Knicks just keep going around in circles. Now the smart-mouth television guys say they couldn’t win the NCAA Tournament. The Knicks lead the league only in salary, and punch lines.”

There is an enormous difference between playing ball and understanding complex business economics. The two types are mutually exclusive – deep thinking and playing basketball/football.

The fiscal future of professional sports organizations and teams should never be entrusted into the hands of professional athletes. Either well trained expert non-athletes control the sport or we create an athlete run police state where the fox is in charge of the henhouse.

Look at the list of “legands” that run a front office worse than they run their chamber pots – Isiah, Jordan, Matt Millen – failures all as general managers and team presidents.

No, Dolan and Matt Millen of the Detroit Lions are boy-kings who deserve Tut’s fate. By suing the fans, Dolan has made himself the most mindless thug in basketball and public enemy number one to everyday New Yorkers. After all – he could come after you next. Dolan and Millen stomp dissent under their jackboot, wrongfully using the law or their security thugs because they have the slush fund to support a frivolous lawsuit and ordinary New Yorkers do not.

Look at the grim, brutish reality that is the NBA. Players have recently:
a) revolted against coaches who make them practice;
b) refused to enter games when instructed by the coach;
c) refused to take open shots;
d) told the opposing team what play was coming;
e) engaged in any other form of insubordination they can justify; and
f) had more arrests than they have legitimate children (too many to list here.)

Yet they still have jobs and get paid. That’s the horrible bill that has come payable due to guaranteed contracts and poor labor negotiating. Players get paid no matter how little they produce and no matter how great the transgression they still get enough money to do nothing but play video games, hang out at strip clubs every night make a social nuisance of themselves.

$4 million a year for 3.2 points, 2.4 rebounds and 4.1 arrests: that’s the line score of the American-born NBA “baller.” Foreign born players play harder simply because most of them had to float to this country from across an ocean on nothing but an American flag and a barrel. They know playing sports is not hard work. But our homegrown player is enabled, emboldened and protected by those who sell their integrity to live vicarioously through the game and athlete.

I know one shallow-thinking sycophant of a labor lawyer at a big Manhattan firm who fancies himself as having enough “managerial timber”to pipe dream himself into the Commissioner’s chair. He once tried to justify guaranteed contracts simply because “we can’t alienate the players” he didn’t have the “managerial timber” to come out and say they are a cancer and stand up for the sport and it’s integrity. He similarly thought the steroids hearings were pointless and that the players’ union was right to oppose stringent testing.

Like Dolan and Isiah, this guy is best off playing EA Sports Head Coach 2006 and leaving the policy discussions to the dedicated, courageous and incorruptible.

Instead, when the fans complain, they get sued. Meanwhile, Dolan, in conduct typical of a man who has never had any idea how to responsibly spend his time or his money, also pretends he’s a rock star, singing blues songs with a bunch of honky-tonk washouts in local dives.

When a banshee screams a soul is stolen, but when the natives scream for blood, they get nothing but higher ticket and concession prices. Moreover, Dolan’s suppression of free speech is downright un-American. Democracy is sports dead in NYC but sports fans can do little but mourn its passing. Sure, there will be a solid group of Knicks fans motivated by selltheknicks.com lining up outside The Merc Bar on 9th Avenue between 45gth and 46th at 5:15 Wednesday. All fans should come to march and protest the gross negligence inflicted on the franchise by the Boy-King and the Sideshow Phony. But nothing short of Congressional or criminal investigation will dislodge Dolan. The only hope is that the teams tanks again next year even worse. Then at least half the equation, Isiah, will be gone.

Meanwhile on ESPN’s “Outside the Lines” this morning we were asked to weep for a hardened criminal teen who’s only hope – we are told by reporter Mark Schwartz – is a multi-million dollar contract from the NBA; a contract he can’t get until he turns 19. Until then, Schwartz paints it “unfair” that the kid has to “work in a candy store for $6.00 an hour.”

How dare an athletic prodigy that the media wants to anoint as a baby-Kobe have to work like the rest of us! What a great message to send the kids. What a great civic example to lionize for the fans who want to see teams made up of players of which they can be proud.

But of course, to the owners and the media who are star-struck praying at the holy church of the professional athlete, once these fans turn away, there will always be more chumps right behind them that just look a little different than the last bunch of suckers.

For more information on the march to the Garden, contact Mr. Orange at www.selltheknicks.com or tune in to ESPN.com tomorrow for a live Iternet chat.