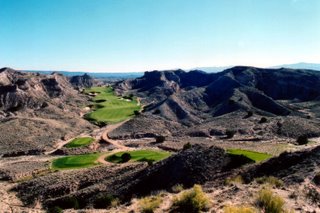 Mother Nature should have taken a holiday. The rains that have ruined En-Joie G.C. in Binghamton have forced the PGA to move the last B.C. Open to ever be played.

The new venue, Atunyote, is one of the least inspiring and most milquetoast courses in Christendom. The course design is a confused and kaleidoscopic whirligig of boring trash with greens and hole shapes that are three scoops of unflavored yogurt. The only thing missing here is the clowns with seltzer water bottles running out to hose down the players. This is one of Fazio’s weakest efforts.

Still, the course has built a cottage industry out of hosting tournaments about which nobody cares. After being played for chumps by the PGA in order to host the Club Pro Championship in return for consideration to maybe host a tournament in the future, they now get to host a tour event for those who miss getting into the British Open. Translation: Once again, no one will be watching. Pine HIll in Philly would have been more interesting. It also sends a bad message to the world that the PGA is taking casino money in return for being chosen as a venue.

Noone is listening either while Atunyote shouts about how they think they deserve a major. They had better get in line for dreaming of hosting that major they scream to anyone ill-traveled enough to listen. Funny, but Oak Hill is right next door and is a much more interesting and challenging venue. It also will be pretty upset if a second-rate course pirates a major through casino money. Not gonna happen.

Besides, isn’t another course [Trump National, Bayonne, Liberty National] a better choice? :):) After all, the PGA will make more money in NYC than they will in Utica.

The article about the relocation is here.

A detailed review of the course is here.

With all this talk of boring venues, I thought I’d post a picture of a real golf course for real aficionados. Here’s Black Mesa (La Mesilla, NM) No. 16 (above). Remember, unless you are a hardcore architecture student, you read about it here first. Full article on Black Mesa will be up soon.