Ballyowen Golf Club, Hamburg, NJ – Why all the Ballyhoo, Ballyowen?

There has been a lot of ballyhoo about Ballyowen, some of which is deserved and some of which is marketing fluff parroted by over-enthusiastic New Yorkers and uninformed players who fall victim to the hyperbole. The course touts itself as a “true links experience.” “The minute you see the site you will think you are in Scotland” chirps the marketing literature in an attempt to play off the ever-rising popularity of and reverence for the great courses of the UK and Ireland. To add to the “true links experience” the course hired several bagpipers (who are really nice guys) to play each evening and imported black sheep to sit in a paddock to the right of one fairway.

Let’s get something straight right from the get go. Ballyowen is an excellent golf course, but only a drunk goat would mistake the setting for Scotland. It looks like a quaint fescue-lined course in a quaint New England/New York/New Jersey town. Further, there are some unauthentic features such as forced carries over water or scrublands. Finally, there is nary a pot bunker on the course. Rulewich instead opted for the more familiar parkland style inkblot bunkering he learned from his mentor Robert Trent Jones. Also, there is a first cut of traditional rough which is deliberately left quite long. This first cut is deep and penal so hitting the fairway is a must off the tee to card pars.

Despite the superfluous distractions for the uninformed, the course has some authentic characteristics. The entire site is treeless so the wind is merciless. Towering fescue lines both sides of most fairways and most greens are open in front and receptive to bump and run approaches.

Finally, the conditioning is superb. Fairways are impeccably manicured and the greens are tour quality and lightning quick.

The only other conundrum besides the marketing nonsense is the astronomical price. At $135 in high season and $85 at twilight, the course is an expensive splurge. The excellent design and phenomenal conditioning are refreshing, but the price can be prohibitive. We here at WITP have no problem telling players it’s an enjoyable round, but the value factor is diminished by the high price tag. You won’t feel cheated, but its also nothing savvy travelers have not seen before. It’s in great condition, but it is certainly not Bandon Dunes, or Whistling Straits.

While the two opening par fours are short, accuracy is key. Any shot in even the short rough will have difficulty resulting in a green in regulation. The second is a solid risk reward par-4. The corner on this short dog-leg left is guarded by a deep chasm of fescue and brush. At a mere 300 yards (severely uphill) the green may be drivable, but any miss is either unplayable in the hazard or in a deep, penal greenside bunker.

The next stretch of holes are well designed, but any trained eye can easily see they are not links holes. The third hole features a huge Rorschak-like inkblot-shaped bunker in the middle of the fairway just short of the green. Not a pot bunker, but a classic parkland style Rees Jones-esque bunker. How Scottish is that?

Next, holes five, six and seven play around a large inland lake with the hazard uniformly on the right side so as to frustrate slicers. On the par three sixth, the hazard cuts in front of the green resulting in a forced carry to reach the green. Again, these do not resemble a links in any way.

The back nine feels more isolated and takes the players past the sheep paddock located to the right of the twelfth tee. It features another par three over water and more classic style bunkering.

The goal here is to showcase great $60 courses that are worth $120 and great $150 courses worth twice as much. Ballyowen is the opposite, a $135 course worth $60, maybe $80. To its credit, the course is a strong layout, impeccably manicured, features fantastic true-rolling lightning quick greens, but the inaccurate marketing schtick is both distracting and detracting.

To the courses credit, many players love the course. New Yorkers embrace anything of good quality in New York with rabid enthusiasm and have rallied around the course and rave about it loudly and often. But Golf Digest, Golf Magazine and Golf Week have never once rated it anywhere near the top 100 in the country, so something does not jive. The course is in the same price range as Las Vegas’ greatest courses and Myrtle Beach’s greatest courses, but is not at great a design as Caledonia, The Dunes, Wolf Creek, The Falls, or TPC Myrtle Beach.

As far as New Jersey is considered, Ballyowen makes a strong case for being one of the best courses in the state. I still prefer Pine Hill and Shore Gate, especially at Shore Gate’s incredible $40 twilight rate, but I believe Ballyowen can stand shoulder to shoulder, pound for pound with Pine Barrens and Twisted Dunes, the other leading New Jersey public courses. Since Ballyowen is part of the larger Crystal Springs Resort and is the centerpiece of the 72 hole complex, it need not worry about fiscal downturns as much as its purely public competition at Empire Golf Management (Pine Hill, Twisted Dunes and Pine Barrens.) All of these courses are in the $125 range and all should have lowered their prices. Sadly, hard times have fallen, cuts have been made to staff and instead, Empire Golf has announced all its facilities will go private under a “superclub” arrangement – one membership for three or four clubs at a premium but not prohibitive price. As for me, I’d rather spare the sheep and hyperbole and get a great course at a reasonable price.

Look at the pic to the right. Does that look like Scotland to you? 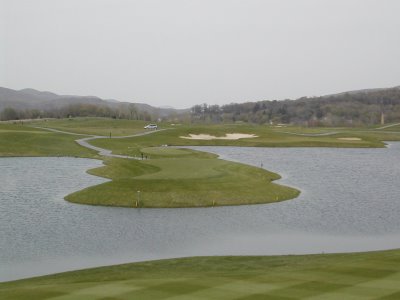