Phil Mickelson and family, it’s the March of the Penguins

Recently I endured a Hollywood director’s mind-numbing rant about how angry he was that “March of the Panguins” blew away pretty much everything last year at the box office. “I can’t uncerstand it” he moaned. “It had no production, no budget, no plot and one star, who never appeared on screen once!”

The New York Times also panned March of the Penguins in a fit of sadly political metaphor noting that “it exchanges nihilism for family values.” Notably, it gave a good review to such “enduring” horror schlock films “Hostel” and “Saw 2,” which time has shown to be utterly forgettable.

While I choose not to pass judgment on the POLITICAL issue, I’ll note that family values are not lost on everyone and have endearing moments.

Cut to Phil Mickelson. MIckelson and family are just like March of the Penguins…And not just because he resembles a penguin. Yeah, he’s a little chubby, a little frumpy, a little dopey-looking. And yes, he does kinda…well..waddle down the fairway a bit…it’s not the most graceful gait. But that’s not it.

People gravitate to him because family values are not dead in America. In fact, they are still a strong, surging groundswell. And while the media may attack Phil for such “atrocities” as 1) not living up to their hype; 2) taking on Tiger, the media anointed chosen one in “equipment-gate”; 3) having too pretty a wife and too cute kids; and 4) exchanging equipment before the Ryder Cup; the observant and dedicated golf fan sees right through their nonsense.

We see right through it even faster than we see through Dan Hicks’ vacuous Tigerphilic play-by-play calls.

Phil has endured vehement media firestorm unecessarily. First, he became poster boy for the most overused, worthless, disgraceful, stupid and unecessary talking point – “who is the best player never to win a major?” “Zero-for-whatever” they kept counting.

Has that nonsense ever been used anywhere else in the history of sport? Ever heard “greatest team never to win a super bowl” or “greatest manager never to win a world series?” No. Phil alone had to endure such ignominy. Good thing now there are too many players to warrant any consensus on the issue. Now its just for chumps who have nothing else to write or talk about.

Well Phil sure got that monkey off his back in spectacular fashion – he beat it to death with a gap wedge. He took “BPNTWAM” and buried it in a coffin, threw the coffin in the river, and hurled the river into space. But was that good enough? No.

There was “equipment-gate,” the offhand comment about the Woods and Nike union. Another firstorm of controversy. Next, the media would pin the U.S. loss of the Ryder Cup on him too – first for switching equipment right before the tournament and then for two poor shots.

And worst of all, last year the media banged the drum; “Phil is a phony…all he talks about are his family and his kids.”

Funny thing though – the patrons and real golf fans aren’t buying it. “Real golf fans get Phil and love Phil” said golf fan and U.S. Open attendee Andrea from Asheville, NC. “He reminds us of our own lives. He’s not untouchable like so many other tour players. There is a warmth there. Not only to us, but it’s nice that we get to see those glimpses with the family too.”

To some in the media, the story rubs them as sacchrin-sweet. “Well we don’t buy into alot of that” said Brian from Manhattan who watched Phil’s victory at Baltusrol. “They like to think that we believe everything they tell us and sometimes they get convinced were listening. The casual fan may be influenced 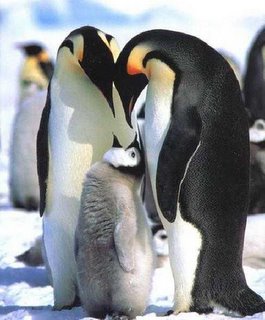 by what he reads and what he sees on ESPN, but real golf fans know ESPN knows nothing about golf and TV announcers know little more, if any. And let me tell you something. We root for Phil.”

So Phil went out and won the PGA last year too. Much to the delight of all greater NYC…and Arizona…and the golf public at large. So what does the media yell about? He blew off the Tour Championship and the Mercedes.

Oooooooooooo…the Toooooour Chaaaaaampionship….Yeah, like we were all glued to that to begin with. Let me know how this year’s turns out…I’ll be out playing.

(seen right, Phil, Amy and Evan celebrate Phil’s victory at the PGA on the 18th Green.)

Go ahead. Try and name one incident where Phil caused any real trouble. He never threw a camera in a lake, (Woods-Williams) screamed at a patron (Woods), made obscene gestures (Singh/Kaye), dropped repeated f-bombs and m-f bombs (Woods…at one point five years running most fined player on tour) demanded to be paid for the honor of representing America (Woods/Duval), raked a green at the national championship while the reigning Masters champion (Woods), took a divot out of the sixth green at Riviera (several), ridiculed Annika for wanting a week with the guys (several) or whined about a course set up (several).

When has he ever stalked off the course in anger without signing his card (Daly), comedicly hit five balls in a row in the water (Daly), swung at a moving ball (Daly), acted like some kind of redneck Zorro signing body parts (Daly) or drank so much he couldn’t function the next day (Daly)?

Did he ever once lose patience with a writer out of anger for the POINTED questions he got asked time and again early in his career? Was there ever a snap, snipe or sour note? Not once. He took it all and he took it like a GENTLEMAN.

No…somepeople just don’t like Phil because, for the most part, you can walk 360 degrees around him and there’s no dark side. Which means there is precious little to write about during silly season. The rest? Well you know what? There comes a point when it’s nobody’s business. Just because you play good golf does not mean you give up the right to have what happens in the family stay in the family.

Where that line is remains unclear, but Phil has never run from us like Woods. Or Singh. Or others.

Well guess what Hollywood and New York Times. March of the Penguins not only showed us that you don’t need special effects and “megawattage starlets” to make an enduring masterpiece, it also showed us that people do care about heartwarming stories, good sportsmanship, acting noble and being humble. People care about hard-working, non-preening overachievers who put family first. In fact, they sure are more inspiring than the examples set by Drew Barrymore (laughing as her mansion burned down before driving off with comic “genius” Tom Green in his sports car), Johnny Knoxville (hey he calls himself “Jackass” – so there ya go) Paris Hilton (don’t even get me started started).

We aren’t buying the stale coffee Hollywood and the media are selling anymore.

Cut back to Phil. No, media, we don’t believe he’s a “phony.” We don’t thnk the love of his family is merely an act and thast there is really some “American Beauty” undercurrant at which to “look closer.” No, people still like to root for the good guys (Pittsburgh Steeler fans sure abound everywhere, don’t they). Just as we found it touching the way penguins waddled and stumbled, yet loved, nurtured, survived and thrived so too are we drawn to a great Pheel good story. A story of waddling and 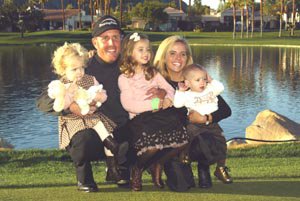 stumbling (at first) in his career, then a story of survival, victory, nurturing and love.

Hating a guy because he chooses to be a loving husband and parent in the public eye. I think we all pray that that never becomes fashionable.

(Seen to the left, the emporer penguin, with several chicks and his mate, will protect his young by sheltering him beneath a fold of fatty skin.)

There are 2 comments. Add yours