Jack Nicklaus’ Dirty bunkers and Steve Czaban’s Hole in one 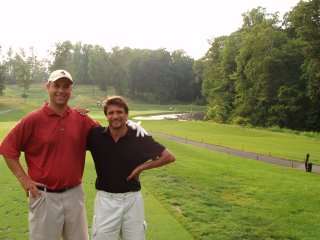 Jack Nicklaus has obviously learned from his association with eminent architect Tom Doak. As you may know, the minimalist Doak and the normally flowery Nicklaus have collaborated on the highly anticipated and touted Sebonack Golf Club – a private design tucked neatly between The National Golf Links of America and Shinnecock Hills and which asks over $575,000 as an initiation fee.

Doak writes of the benefits of what many call “dirty bunkers” – basically poorly kept, poorly swept and heavily schleped bunkers. Others, who ask anonymity agree: “Rake the trap? It’s a hazard! Screw the next guy! Let’s see the guys hit a fried egg for once.” Heck, National’s architect, C.B. Macdonald said he thought they should run a herd of elephants through the bunkers before a major champoinship. A great many besides Doak and Macdonald often echo the words of Old Tom Morris that bunkers are places of punishment and repentance.

Nicklaus the architect (would Nicklaus the touring pro feel the same way?) has taken the first step in restoring hazards to hazards and not places to spin a shot into the hole. “Furrowed” rakes are sweeping the traps to cause the lies to be just a little more irregular and random than in clean bunkers. I know from experience that the pros engage oin hyperbole when they whine “you’ve got no chance. I learned to hit out of bunkers out of nothing but fried eggs – my coach would step on each ball before I hit it and its not the same as some inconvenient furrow.

They are just that – an inconvenience. So much for a free run at a birdie out of a hazard. Next time, hit the green, like you’re supposed too.

As Brian Silva says about the rest of us mere mortals (and it now applies to the pros) “It’s a bunker! You hit in it, you find you’re ball, you hit it out again, what’s the problem?”

Finally, it’s time to celebrate with my dear friend Fox Sports Net Broadcaster Steve Czaban – Czabe got his hole in one. Unbelievable. “Jay, it was bedlam. The tee box looked like a tornado slammed though. There was that split second of ‘did that just go in?’ and then the celebration started. I don’t remember much outside the high fives and double high fives, it’s all a blur.”

Now to top off the craziness – Czabe did it on his Birthday!!! The odds just skyrocketed to 365.25 times as astronimical as they were otherwise. To not only get a hole in one, but a hole in one on your birthday?! I conservatively estimate the odds to be about 1 in roughly 6 million.

That’s reedonkulous! (That’s “ridiculous” with a donkey thrown in to take the absurdity over the top.) As Steve said on his website – “Happy Birthday to me. My family can just return whatever gifts they’ve got me. I’m good for a long long time.”

Pic o’ the day: Czabe and I at Bulle Rock after the incredible “Beechtree in the morning and Bulle Rock in the afternoon” double shot last fall. Via con dios, my friend. Enjoy your golf immortality.