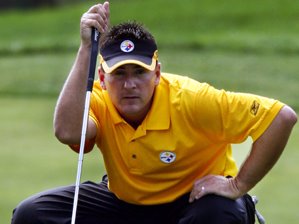 The press buried a terrific story this weekend.

Ben Curtis, the quiet, but affable pro who is best known for winning the 2003 British Open won his second tournament this year at the 84 Lumber Classic.

Curtis became a hero to everyman golfers across the globe when he played steadily for four days at quirky, tricky Royal St. George’s, then watched in amazement as the field fell beneath him at tournament’s end. The rookie pro, playing in his first major happened to be getting married a few months from then and the “fairy tale, rags to riches story of the nice kid from Ohio who done good” introduced the golf world to a really nice steady, even keeled guy and his equally charming, down-to-earth wife.

Ben fell off the radar screen for two years for two reasons. Until this year, he would play great only on Thursday and Friday. This year, that trend has ended as he won the Booz Allen Classic earlier this summer.

However Ben is a also quiet, humble guy by nature so he offers journalists bland quotes. That is no reason to bury Ben winning his second tournament of the year, but that’s exactly what ESPN and the New York news media did.

ESPN’s entire coverage of golf on “SportsCenter” was delivered by the anchor as they were signing off with an offhand, oh-by-the-way “Ben Curtis won the final 84 Lumber Classic.”

But we sure had wall to wall coverage of the all-important Packers-Saints game. In fact, all night every network gave endless analysis and superlatives over the ridiculous minutiae of week two football, without so much as a single golf highlight. If it were Tiger, Phil or Michelle Wie (who was every single ESPN highlight Thursday and Friday night), we would have seen golf. Moreover, “SportsCenter” was really just TJ and Berman going over the day’s NFL action ad nauseum. It’s merely Week 2 and they are trying to sell us that “we almost had seperation in the NFC East.”

Please, that’s just crazy talk. It’s Week 2. Nobody is “getting separation” from anybody.

Except the Patriots – their division is putrid.

I’m surprised. The tournament was also broadcast over ESPN, but since they have no more golf starting next year, there is no reason for them to beat the drum for the game. It’s just not as sexy as Lord Football….ahh…now I get it.

Sadly, in both New York major dailies, golf was reduced to a one paragraph of bullet points.

Here was the entire coverage in today’s New York Post – “Ben Curtis carded a 70 to finish at 14-under par 274 to win the 84 Lumber Classic by two shots over Charles Howell III yesterday in Farmington, PA.”

No mention that it’s the last 84 Lumber Classic so Tim Finchem can run his “Fed Ex Cup” next year to try and revive eyeballs to golf as football begins. No mention that it was held at the opulent Nemacolin Woodlands Resort’s excellent Pete Dye “Mystic Rock” course. No mention that tournament founder Joe Hardy plans on having some kind of pro event despite getting bumped from his slot unceremoniously. No mention that Ben’s wife Candace – 8 1/2 months preggers, surprised him by popping onto a van and hiding out behind 18 green until he finished. Not even any mention Ben, who is licensed to wear NFL gear, won in Pittsburgh Steeler colors even though he is a lifelong Browns fan. (Nemacolin is an hour and a half outside Pittsburgh.)

The media thinks that, compared to football, this story just isn’t sexy enough. Well, I know I speak for all the golf world and every true golfer when I say this:

1. I think a nice, hard-working humble guy winning a big pro golf tournament is sexy enough for us.

2. I think having the grace to compete. let alone win, in the colors of a team you hate is sexy enough for us.

3. I think a kiss from your pregnant wife on the 18th green after you’ve won a four day grueling tournament is sexy enough for us.

There are 3 comments. Add yours